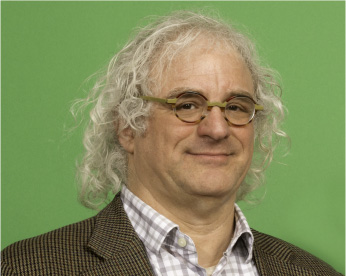 Andy Golub’s career has involved information systems and academia in various ways. He received his bachelor’s and master’s degrees in Operations Research and Industrial Engineering from Cornell University in 1981 and 1982. He worked at AT&T-Information Systems in the mid-1980s on “Net 1000.” Net 1000 was intended to do for computers what AT&T had done for voice with the telephone. Eventually, AT&T closed the project because they determined it was not economically viable at the time. Indeed, the subsequent growth of the internet was greatly fueled by public funding as well as major advances in technology.

In 1986, Andy met Beth at a volleyball game in Boston. They were married a year later. They spent their honeymoon bicycling across Belgium and the Loire Valley of France staying at bed and breakfasts, picking wildflowers, and playing scrabble. Afterwards, they moved to Pittsburgh where Andy went back to graduate school earning a Ph.D. in 1992 in Public Policy Analysis with a focus on statistics from the Heinz School of Public Policy and Management at Carnegie Mellon University.

For nearly three decades, Andy has been involved in multi-method public health research working with National Development and Research Institutes (NDRI). Much of this work has examined drug use and misuse in context with an aim towards informing appropriate policy responses. Based on his work and a broad read of the literature, Andy developed a “theory of subcultural evolution” describing the dialectic of mutual causation of drug epidemics with individual identity development that has guided his research. Over his career, Andy received 13 grants including awards from several sections of the National Institutes of Health (NIH) and from the Robert Wood Johnson Foundation. He served a five-year term as a standing member of the Community Influences on Health Behavior (CIHB) review group for the NIH. He has produced over 100 peer-reviewed publications covering such topics as the Crack Epidemic of the 1980s, quality-of-life policing, opioid use among military veterans, and cohabitation in low-income African American families.

Andy has taught statistics, public administration, and sociology at John Jay College of Criminal Justice and at the University of Vermont (UVM). He wrote a textbook on Decision Analysis: An Integrated Approach (Wiley, 1997) which was published by his editor and life partner Beth.

Prospect Press was originally conceptualized on a six-hour car ride to visit family in November 2014. Back at home, Andy did the initial feasibility analysis which involved a few dozen cells in a spreadsheet. Since then, he has worked mostly behind the scenes on planning the evolution of the business and overseeing its implementation. He still collaborates and consults on public health research studies occasionally but spends most of his work time on Prospect Press activities.

Outside of work, Andy enjoys skiing, hiking, gardening, and going out for brunch with Beth. Beth and Andy have two children in their twenties: Abby and Milo. The entire Golub family are drummers and play in Sambatucada, a Carnivale style Brazilian marching band. Andy’s drumming career has progressed from the djembe to the two-toned bell agogô, the triangle, and the cowbell. Currently, he plays the cuica, a curious “friction drum” that produces the drone sound in Brazilian music and is occasionally featured in popular music such as “Alphabet Street” by Prince and “Locked Out of Heaven” by Bruno Mars.